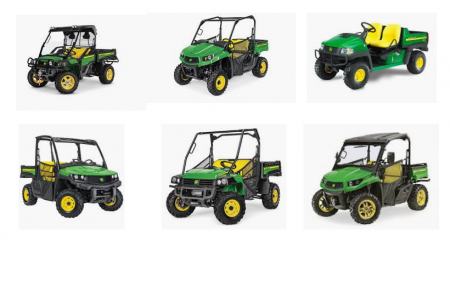 The John Deere Gator is a family of small SUVs made by John Deere Corporation. They are usually equipped with a drawer bed, similar in functions to a pickup truck. The bed can also be installed in the form of an electric blade. The Gator John Deere was manufactured in a variety of configurations with four or six wheels. Gator cars are designed for use on farms, job sites, and ranches, not as off-road vehicles. However, it can be ordered with certain off-road functions. In 1992, the car replaced the three- or five-wheeled AMT John Deere, introduced in 1987.

Gator cars use small but powerful four-stroke engines with a capacity of 341 cubic meters. See (0.341 L), which can be found in lawn mowers, or the optional diesel engine, which can also be found in some Deere mowers and auxiliary tractors. They use a continuously variable transmission using a belt and a conical pulley system. Thus, they do not require a clutch or gear shift to operate. There are many third-party attachments available for the Gator, including snow blowers, grinders and gun racks. The recommended maximum load capacity is 600 pounds (272 kg). The AMT size was designed so that it can be easily loaded into a pickup truck (day) for transportation to various remote and / or inaccessible places where conventional means, such as towing a trailer, can be dangerous or troublesome. , The parking brake is checked using the dry dock procedure. The overall design of the first and second material transporters (AMT) was simple, easy to maintain, and easy to install on site.

In the Gator family of cars, John Deere produces several lines. These are traditional series, high-performance (HPX), compact and XUV-series. It also offers several special vehicles, including the off-road-oriented Trail Gator, olive-colored for better recreational and sporting use. Turf Gator is specifically designed to serve golf courses. M-Gator is a paramilitary option used by the US Army.