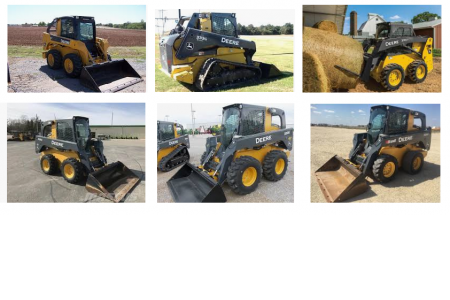 Skid steer loaders are typically four-wheeled vehicles whose wheels are mechanically locked synchronously on each side, and where the left drive wheels can be driven independently of the right drive wheels. Wheels, as a rule, do not have a separate steering gear and keep a fixed direct alignment on the machine body. The rotation is carried out using differential steering, in which the left and right wheel pairs work at different speeds, and the car is rotated by skidding or moving wheels of a fixed orientation on the ground. The extremely rigid frame and robust wheel bearings prevent damage to the machine from the torsional forces caused by this pulling movement. As with tracked vehicles, high friction on the ground created by skid steer loaders can break soft or brittle road surfaces. They can be converted to low friction on the ground using specially designed wheels such as the Mecanum wheel. Skid steer loaders are able to pivot with zero radius, making them extremely maneuverable and valuable for applications requiring a compact, flexible loader. Skid steer loaders are sometimes equipped with tracks instead of wheels, and such a vehicle is known as a cross-country truck.