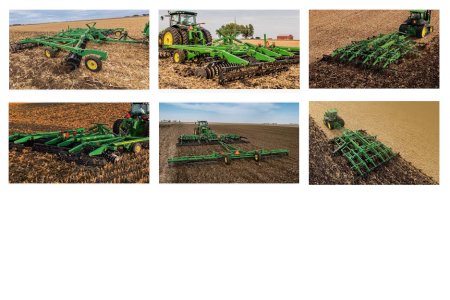 Tillage is the agricultural preparation of soil by mechanical stirring of various types, such as digging, stirring and tipping. Examples of hand tools for tillage using hand tools include shoveling, harvesting, hoe handling, loosening, and raking. Examples of traction work or mechanized work include plowing (tipping with dumps or chiseling with a chisel), rolling with knurling, rolling with multipackers or other rollers, harrowing, and cultivating with cultivator tails (teeth). Small-scale horticulture and agriculture, for household food production or for small businesses, tend to use smaller-scale methods, while medium-and large-scale agriculture tends to use larger-scale methods.

Tillage that is deeper and more thorough is classified as primary, while tillage that is shallower and sometimes more selective is secondary. Primary tillage, such as ploughing, tends to produce a rough surface, whereas secondary tillage tends to produce a smoother surface treatment, such as is required to create a good seedbed for many crops. Harrowing and rotation often combine primary and secondary tillage in one operation.

"Tillage" may also mean cultivated land. The word "cultivation "has several meanings, which largely coincide with the meanings of"tillage". In a General context, both may refer to agriculture. In agriculture, both can refer to any kind of soil agitation. In addition, " cultivation "or" cultivation " may refer to an even narrower sense of shallow, selective secondary tillage in tilled crop fields that kill weeds while protecting crops.