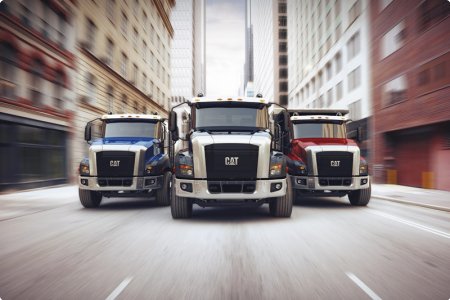 Most American trucks are equipped with engines of three local "grandees" - Detroit Diesel, Cummins or Caterpillar. For the latter, by the way, the production of engines is rather a side business, for today “Cat” is the world`s largest manufacturer of construction, first of all, tracked vehicles. It is not by chance that the very name of the group means “caterpillar”, as in Russian, in both meanings of this word.

A few years ago, Cat announced the creation of a family of trucks under its own brand. Soon after, the world crisis struck, and everyone decided that this was not the plan to come true. It turned out - destined, and how!

First, more than a year ago, “reconnaissance by force” was carried out - a family of bonnet (what else!) CT 610 / ST 630 came into the world. Moreover, distant Australia was chosen as the “launch pad”. The fact is that it is precisely where ultra-long haulage “rule the ball” in harsh climatic conditions, you can perfectly test cars in real life. And since the market of the fifth continent is small, you can not risk a lot of money, and in which case, without any problems, curtail production.

These machines were the result of cooperation with the company Navistar, which manufactures International brand trucks. On the basis of the TranStar and ProStar families, the firms International and Australian Caterpillar CT 610 / CT 630 were created, respectively. The full mass of the road train with the first tractor was designed for 57 tons, the second - for 90 tons.

There were few differences from the “donor”, ​​first of all, of course - engines, three to choose from: Caterpillar with a volume of 11, 13 and 15 liters with a capacity of 330 - 550 hp For local conditions, more powerful frames were used, the suspension was strengthened, and the brake systems were protected from sand. And, of course, large “Cat” emblems were screwed onto the “Inter” hoods.

Obviously, the Australian “caterpillars” have been successfully tested by the market, and in the spring of this year a full-scale premiere of the new Caterpillar trucks took place in the historic homeland of the United States.

These trucks are no longer just copies of another manufacturer with a “label” pasted in, they are actually designed virtually from scratch. At the same time, cooperation with Navistar was still preserved.